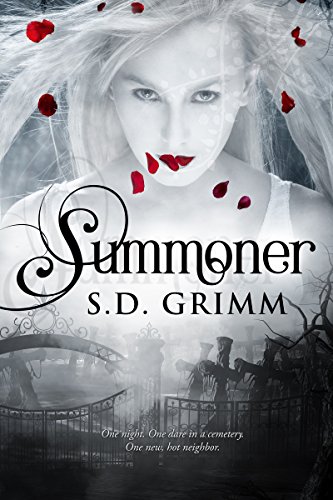 A fast-paced ghost story with sizzling romantic suspense, original fantasy elements, and a dash of keep-the-lights-on-at-night.

A fast-paced ghost story with sizzling romantic suspense, original fantasy elements, and a dash of keep-the-lights-on-at-night.

It’s Halloween!! And I’ve got the perfect book recommendation for those of you who want a little spooky this holiday without getting your socks scared off. Summoner is an awesome October read to get you in the mood for the season.

Yes, the author (S.D. Grimm) is like a sister to me, but I genuinely love her books, and she’d murder me in the night if I said anything untrue about her books. (Really.) If you’re in the mood for a quick spook or swoon-worthy cowboys, pick up this book.

When Allie’s best friend dares their group to play a game in a cemetery—something she calls “witching”—Allie never expects what it might mean for her. When she plays, she doesn’t just find bodies, she summons their souls. But one soul wants more than Allie is willing to give.

And the boy next door could be the key to saving her.

Cody Burkhart. Straight from Montana, cowboy hat wearing, and smoking hot, he’s just the thing to help Allie become “normal” again after the death of her mother. And as her newly appointed Guardian, he’s also just the thing to help Allie ward off the vengeful spirit who’s after her soul. Except Cody has his own demons to slay that keep him closed off. But as the full moon approaches, so does their only chance to break the curse, and Cody will have to make the biggest sacrifice of all.

Recommended for fans of fantasy and romantic suspense. Recommended for ages 14+. While the characters are older teens/young adults, any adult fan of the genre would love it.