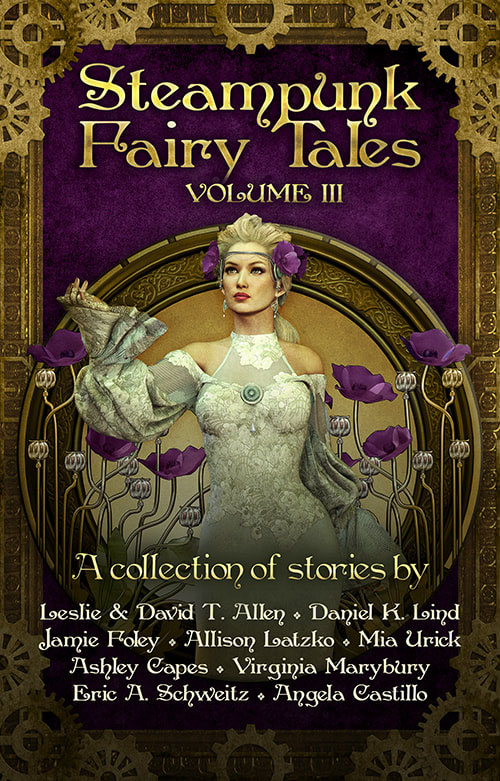 THE ELVES AND THE SYNTH-MAKER BY JAMIE FOLEY
Clara would do anything to make her synth-limbs work for disabled soldiers—even spend her last coin on fairy ether. Now the elf who’s stealing Clara’s joyberries every night may reveal the secret of steam-tech… if Clara can catch her.

THE IRON MINOTAUR BY LESLIE & DAVID T. ALLEN
When the jails are full, prisoners are forced to enter the labyrinth for a chance at freedom. None have succeeded. So why does a free man willingly enter the competition?

IGNOBLE HOSPITALITY BY VIRGINIA MARYBURY
What is nobility for, in an age of revolution and machines? Set by her grandfather to find a prince, Vita finds an unexpected solution, and learns a lesson in hospitality.

ANGEL DELIGHT BY DANIEL K. LIND
Goodwin Thornberry is an eclectic shoemaker. Deeply in love with a woman from high society, Madeline Bainbridge, he does anything for her. When she asks him to make her special shoes for a big ceremony at Town Square, he is perplexed.

Lucky for Goodwin, a man by the name of Timotey Pelkington shows up with a pair of singing angelic insoles. Just what Goodwin needs to impress Madeline! There is one problem: dreadful things happen if anyone asks the shoes to sing… and there will be a choir present at the ceremony.

THE MECHANICAL HEART BY MIA URICK
Not a retelling of any one classic fairytale, but if you look you’ll see shades of The Wild Hunt and Little Red Riding Hood.

STEELHAND BY ASHLEY CAPES
When a man with a mechanical hand hears a woman’s voice echoing in his head, calling for help, he must brave the steel forest and a grim castle to rescue her from the clutches of a foul Alchemist.

GRIMESBOBBLE BY ANGELA CASTILLO
Sent away to perform an impossible task, Canta finds help from an unexpected source. But will it come at a terrible price?

VALENTINE BY ALLISON LATZKO
A young and worried girl must save her best friend from a mysterious factory owner and his icy, child-stealing ‘Queen.’

OUT OF THE TOWER BY ERIC A. SCHWEITZ
In Newmarket, everyone knows the story of Rapunzel, the beautiful girl with the long hair who saved her prince and inspired rebellion. But Rapunzel must come to face her guilt and learn that truth may yield to perception and revelation.