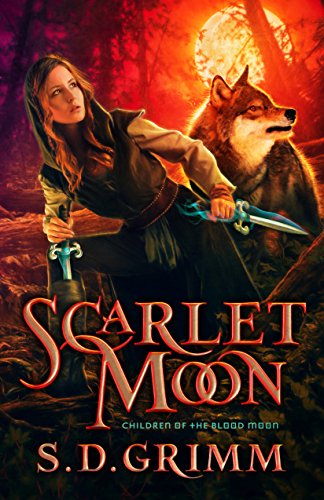 S.D. Grimm is a dear friend of mine, so I was nervous that when I read her debut novel, Scarlet Moon, it might not be my cup of tea. Not so, dear reader. It was a steaming cup of homebrewed, double-spiced chai with dark chocolate on the side.

If you love swords, wolves, magic, and a hefty dose of awesome characters, well, snuggle up to the fireplace, my friend. This cozy read will hit everything you love about the fantasy genre, while still being a unique and page-turning adventure.

Stay tuned below for a cover reveal for the third book in the trilogy, Black Blood!

Destiny can pick someone else.

Evil is slipping through the cracks of its prison, and all Soleden trembles in its wake. Yet some would harness that evil to their own ends, and first among them is Idla, the sorceress queen bent on distorting the world.

Only one can stand in her way: Jayden. Upon realizing her mark as the prophesied Deliverer, Jayden conceals herself from her enemies and her Feravolk countrymen. But after the harm the Feravolk caused to her family, she’s loath to rescue the not-so-innocent.

Hiding her mark was never easy, but now that Jayden knows both Queen Idla and the Feravolk are after her, hiding her gift of the Blood Moon will be impossible.

Highly recommended for fans of fantasy, especially the classics like The Wheel of Time and The Lord of the Rings. Recommended for ages 14+. While the characters are older teens/young adults, any adult fan of the genre would love it.

Cover reveal for the final book in the trilogy, Black Blood!

I can’t stop staring at it. Oh my gosh! Can I have a black pegasus for Christmas?

Destiny made a mistake.

Everyone told Jayden she was the prophesied Deliverer sent to rescue Soleden. But when the time came to defeat her nemesis, she failed. Now the Mistress’s power spreads through the land, strangling all of creation to make way for a world she’s creating herself.

With every moment, the Mistress gains more strength, and Jayden realizes she was never meant to defeat her alone. She’s one of four Deliverers, after all. But if they are caught, the Mistress will use them to gain the Creator’s power. And one of the Deliverers has gone missing and might already be in the camp of the enemy.

Can Jayden reunite the Deliverers before it’s too late? Or will she fail the world another time?